Home • News & Events • Still Theatres After All These Years
Previous Next

Still Theatres After All These Years

When Poblocki Sign Company began creating architectural signage in 1932, movie theaters were becoming the rage. Theaters had to capture attention from passing cars, and so the signage extended outward closer to the street and overhanging canopies were introduced. The blade signs on the side of the building allowed people to see the theater from a distance. There was scrollwork, chasing lights, hundreds of lightbulbs, flashing words and a lot of excitement. The canopies earned the name “electric tiaras.”

Over the years, the theater signs have become a street marker and identification for area businesses directing customers. The signage has also started to deteriorate from weather, age and materials available at the time. Fortunately, there is a resurgence of people interested in preserving historical towns and buildings. Many communities involved in downtown revitalization and historical theater renovation have made signage the hallmark of their efforts.

The Historic West Bend Theatre (The Bend) in West Bend, Wisconsin opened in 1929 and has an active board of directors tasked with the theater restoration project. Their fundraising goal to restore the theater was an aggressive $3.5 million. They have been overwhelmed by the outpouring of community support for this project as $2.3 million has already been donated by the community. Another $1.2 million will likely be raised through prospective government credits and grants.

The sentiment within the West Bend community is that this sign is an icon of the city. Many people are nostalgic and reminiscent of some childhood connection to the theater. Some contributors even had their first kiss there. This emotional remembrance has led to support unlike any the board have seen before on fundraising initiatives. The board is extremely grateful to the community and excited to return the theater to its grandeur.
The Historic West Bend Theatre will “re-light” their historic blade sign on Thursday, September 5th at 5:30pm at 125 Main Street outside the theatre building.

The “electric tiara” includes 478 lightbulbs on the sign and 460 LED lamps within the blade sign. The sign has lighting options to light the entire blade sign all on completely as well as eight different chasing options.

To deepen the sentiments and thank the community for their support, they are offering additional opportunities to participate in the restoration. Supporters can sponsor one of the new lightbulbs in the iconic blade sign for a $100 donation. Supporters can also purchase a share of “stock” in the theatre for $200 and sponsor a seat for $300. There is also an option to support the project in all three ways (lightbulb, stock and seat) for a $500 donation. Donations will be accepted at the September 5 event or online at www.HistoricWestBendTheatre.org and all donations will be recognized in an appropriate manner. For more information visit their Facebook page @HistoricWestBendTheatre.

Poblocki Sign Company has participated in other notable theatre projects in the recent past including Rivoli Theater in Cedarburg, WI, Harper Theater in Chicago and The Emerson Colonial Theatre in Boston. An upcoming renovation we are thrilled to participate in is The Warner Theatre in Milwaukee which is being renovated as the new home of the Milwaukee Symphony Orchestra.

Theater renovation projects can be a rebirth and regeneration for a community. Theater signage gave us our start, and we are proud to be restoring and creating theater signage again after all these years. 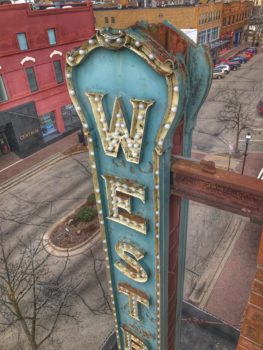 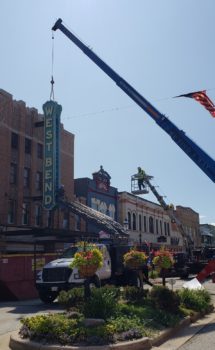