We wish to thank Jim Maertz for a long, successful career in the signage industry. For 29 years, culminating in his role as senior project manager, Jim was instrumental in bringing large and small projects to fruition with us.

Jim attended Francis Jordan High School in Milwaukee until it closed after his junior year of high school. He then had to attend Washington High School for one semester in order to graduate. He went to work at General Electric in their print shop and after 9 months, he joined the army. He served in the army for three years in Washington DC, Vietnam and Fort Hood, TX.

In 1974, he started at the Derse Company installing billboards and attended night school and obtained an Associate’s Degree in Police Science. Six years later, he went to work for a start-up electronic sign company in Grand Island, Nebraska named Kallego Industries, a Division of Chief Industries. On the first day he arrived in Grand Island, the town was hit by seven tornadoes! The disaster wiped out whole sections of the city’s southern business district and hundreds of homes. After a couple of years, Jim and a partner tried to start an electronic billboard company that lasted for a couple of months. They were ahead of their time with electronic billboards considering what we see on today’s highways. Jim then worked for a sign company in Omaha, NE as a salesman. His father took ill and Jim returned to Milwaukee and went to work at 3M Outdoor, again installing billboards.

In 1984, he joined Foster & Kleiser as a superintendent of their outdoor plant in Canton, OH and after one year, the company promoted him to a regional operations manager for their Pittsburgh market. Jim missed home and family and moved back to the Chicago area to work for his brother-in-law’s design/build general contractor business. In 1990, he decided it was time to pursue the woman of his dreams and returned to Milwaukee. He applied at Poblocki and started immediately in project management. For 29 years, Jim has been managing custom architectural signage projects for us.

In his 29 years, Jim has experienced many memorable projects. One of which was Firstar (now US Bank) consisting of 20’ cabinets surrounding the top of the tallest building in Wisconsin. He recalls that the project required lifting 40 – 10’x20’ cabinets to the top of the 42-story building using the window washing equipment. On the first lift, the cabinet swung and broke a window 6 stories in the air. This operation had to be repeated 39 more times and with a little adjustment, there were no more incidents!

During his tenure, he managed projects at Miller Park, Lambeau Field and Soldier Field – which is where he claims to have lost his hair! Lambeau Field and Soldier Field were done concurrently, so Jim recalls a summer of continual driving. One day he would go to Green Bay to manage the signage project there, and the next day he would head to Chicago.

Jim had a knack for large projects and managed one of the largest projects in our history – the rebranding of Presence Healthcare. When asked why he continued in project management for 29 years, he says, “I guess I enjoyed it!”

Jim and his wife, Debbie, have a 25-year-old son named Daniel. In his free time, which will now be more plentiful, Jim enjoys golf, racquetball and ping pong, and has a regular seat at a Tuesday night poker game. Jim is a stellar example of a project manager who sees to all the details while making our customers feel confident and assured. Enjoy your retirement Jim, all the travel you have planned and know how much all your contributions are appreciated and have impacted the Company. 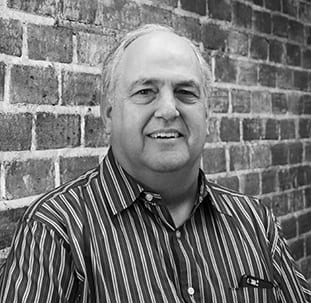